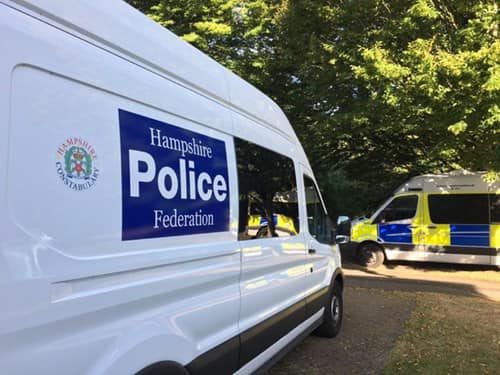 HAMPSHIRE Police Federation’s a new ‘Welfare Van’ is just one of the ways the organisation is showing that looking after people is a serious priority for the organisation.

The van allows members to enjoy hot drinks, use of a microwave, a toilet and somewhere to sit and have a break that is away from an event or when policing a crime scene.

Hampshire Federation Chairman Alex Charge says there was a specific incident that highlighted the need for a dedicated welfare vehicle.

“We had a large presence at a murder scene in Southampton and found that the welfare provision for Officers just wasn’t good enough,” said Alex.

“There were no toilets; nowhere for people to have a break; and no shelter at all from the inclement weather.

“So we discussed it with the Force, but they would have struggled to find the budget required, so the Federation stepped in and bought the Welfare Van.”

Alex added: “Since then it’s been a partnership. We supplied the finance, but the Force insure it, sort out the repairs and fuel it.

“Any Police Officer with a transit van ticket can drive the van. It can be deployed to any situation where Police Officers require welfare support.

“The van can be booked in advance by contacting the Federation office. If it’s needed in real time, they should contact the Force Incident Manager at the control room. It can be used as and when they need.”

The Welfare of its members is extremely important to Hampshire Police Federation, particularly with the problems associated with fewer Officers.

Alex said: “We’ve got 1,000 fewer Officers and recognise that where they are stretched, it hasn’t got any less busy.

“It’s important that we create the best amenities available.

“Sometimes Officers will be standing in a field in the middle of nowhere. That doesn’t mean they shouldn’t have the basic needs of a toilet and ability to get hot drinks and have a little respite.

“It’s really important because looking after people is a serious priority for the Federation.”

“Any Officers who have been subject to assaults will be sent a £5 coffee voucher so they can go and have a coffee and debrief with a colleague,” explained Alex.

“They can go and have a coffee on their own if they want, just to get themselves a little bit out of the limelight; to reflect on what’s happened.

“All they have to do is ask their line managers to contact the Federation office and we’ll send those out.”