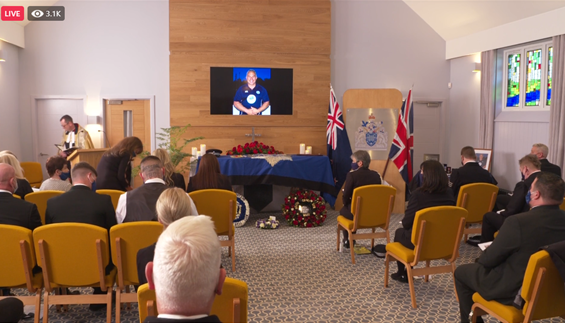 Metropolitan Police officer Sgt Matt Ratana was fatally shot in the line of duty at Croydon Custody Centre on 25 September. His funeral was held today and live-streamed around the world.

Cressida Dick said the key to what made Sgt Ratana a great police officer was his “lovely nature and lion’s heart”. She spoke about his passion for frontline policing and working closely with the public, as well as his great sense of fairness.

She said: “He was quick to assess a situation, to spot danger, to help others. He set high standards for his colleagues,” adding that his colleagues remember his “multiple acts of kindness”.

Many of Sgt Ratana’s friends and family talked about his zest for life and infectious personality. Cressida Dick spoke about a time when Sgt Ratana needed to deal with a difficult crowd at a protest and launched into a Maori haka, which “surprised and diffused the crowd”.

The service was led by Prebendary Jonathan Osborne MBE, senior chaplain at the Metropolitan Police, and Maori speaker the Very Reverend Jo Kelly-Moore, Archdeacon of Canterbury.

There were also speeches by Sgt Ratana’s partner Su Bushby (read by her friend), his family in New Zealand, and friends from South Coast Gym and East Grinstead rugby club, who spoke of his enormous influence on everyone he met and his passion for sport. His friend Ryan said he was “a figure that will never be replaced”.

Sgt Ratana’s family in New Zealand said that the “harrowing experience” of his death had been magnified by the fact that none of them could attend the service.

The force has said that a full service memorial would be planned for when coronavirus restrictions were lifted.