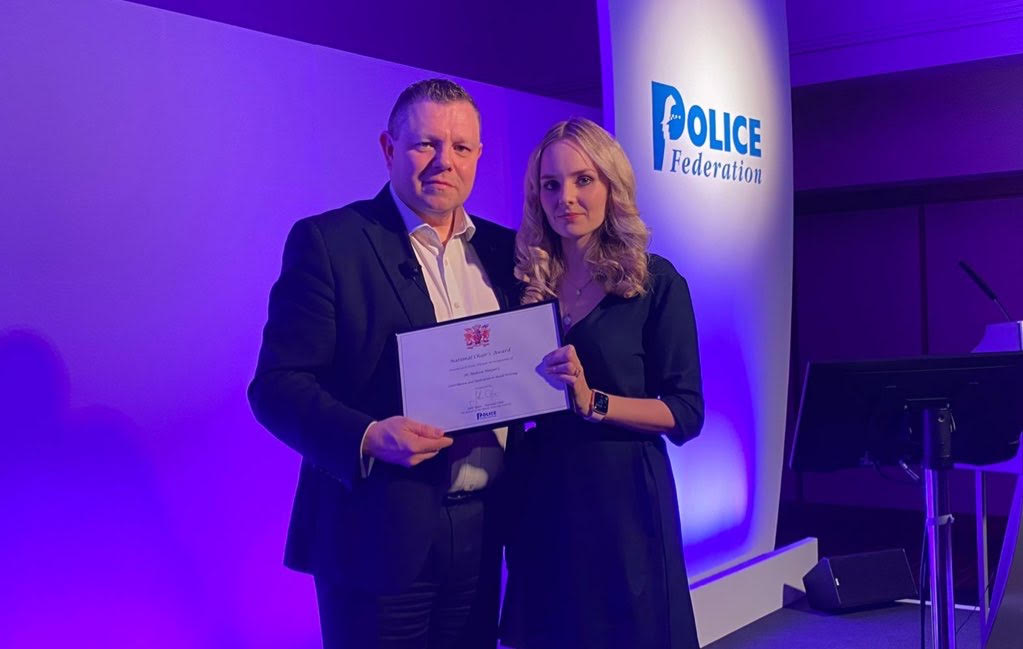 HERO PC Andrew Harper has been given a prestigious posthumous honour by his colleagues at the Annual Police Federation Roads Policing Awards.

Andrew was killed on duty in August 2019, and his widow Lissie received a standing ovation as she took to the stage to receive the Award at the event on her husband’s behalf. They had been married for just four weeks when Andrew died.

The bravery of the Thames Valley Police officer was recognised by the Police Federation of England and Wales at the event in Kenilworth, Warwickshire on Tuesday 28 January with a National Chair’s Certificate for representing “the very best of Roads Policing and policing in general”.

Lissie said: “‪Andrew wanted to be a policeman since he was a little boy, fuelled with enthusiasm and a contagious love for adventure that never left him when he grew into adulthood.

“I think if you were to have asked Andrew what the most important thing about being a police officer was, he would say protecting the innocent from harm and being the barrier of strength and accountability against the guilty… even if he had to stay on late and buy another kebab from the notorious kebab van that he loved to visit.

“‪Andrew joined the police force when he was 19 years old. He gained so much from every shift and every new team he joined, I don’t think he felt totally contented until he joined Roads Policing. He began to thrive more than ever, whether he drove alone or had some company he soon made a name for himself as one of the most productive and motivated officers in Thames Valley Police.

“‪I wish more than you could ever know that I wasn’t standing up here accepting this acknowledgement on behalf of Andrew, I wish in so many ways that he had been just a little less brave. But then he wouldn’t be the amazing person that he was. The silent protector going about his job without expectation or recognition.”

Lissie concluded: “I do want to thank you for this heartwarming show of appreciation to Andrew for all that he gave. If one thing is for certain it is the unbreakable bond between officers. A mutual respect and unspoken pact to stand strong together and to take care of the families of the fallen heroes.

“I for one have been touched and overwhelmed with the immense support I have been given from the Police family. For that I am eternally grateful. I know deep down in my heart that Andrew had extreme faith in his roads policing team and all that he worked with.”

Lissie is pictured with PFEW Chair John Apter, who said: “Every day police officers run towards the unknown, putting themselves in harm’s way and risking their own safety to protect others.

“When one of us falls, their loss is felt by all of us in the police family. But we remember with pride, their courage, selflessness and dedication to duty.

“These are the qualities we associate with Andrew. A certificate may seem a small thing, but it is genuinely meant with love and compassion. He is a hero who will never be forgotten.”